We’ve been reading some heavy stuff lately — some of which may not have made it to our #TBR list had we known beforehand what we we’re in for. So that got us thinking: Should books come with trigger warnings?

DL: I’ve been reading Roxane Gay’s An Untamed State and am sort of blown away by how devastating it is. If I were the type of person who would be traumatized by certain types of violence, this would definitely do it.

EM: Yeah. I’ve heard a lot about that book and while I like Gay a lot, I didn’t know if I could handle it, so I’ve avoided it so far. I’m curious: Did you know much about the book’s reputation before you started it?

DL: I knew it was about a Haitian woman who gets kidnapped and held hostage, but I guess I wasn’t expecting it to be so blunt with the descriptions of what she goes through. There’s no fade to black, no allusions to mistreatment. It’s all put right there on the page.

EM: And how did you feel when you were reading it? Was there a point when you wanted to put the book down?

DL: It was not something I wanted to read, and I did have to put it down and come back to it a couple times. But, I’m also that person who feels compelled to finish a book once I start it. Despite the uncomfortable scenes, I still think it’s a good, well-written book.

EM: That’s interesting. I ask because I think those questions are relevant to our topic. I have to say that I’m not against trigger warnings, but I do have a hard time thinking that they should be included in academic settings.

DL: I’d say I’m pro-trigger warnings no matter what the setting, but they should apply to content as opposed to ideas. Descriptions of graphic violence can trigger people who’ve experienced violence, as can descriptions of rape or sexual assault. But, instances like that kid at Duke who didn’t want to read Fun Home by Alison Bechdel because it supposedly conflicts with his values? No pass, kid.

EM: I can see people arguing that you can’t permit one and not the other. Two things worry me: Professors facing complaints when they don’t use trigger warnings and the potential “idea-based” warnings.

DL: But we do permit one and not the other, at least outside of the classroom. Movies, TV shows and video games are rated for content, most notably sex, violence, language and drug use. Strangely, books are not. We recognize that people want to know what the product contains in order to decide if they want to view it or not.

In the case of the classroom, I don’t think it should be required but I could see it resembling other accessibility efforts universities make. The institution I work at requires professors to include a clause saying that if a student needs accommodations to succeed in the class to contact either the professor of the school’s office of disability services. It puts the onus on the student, which I think is acceptable. 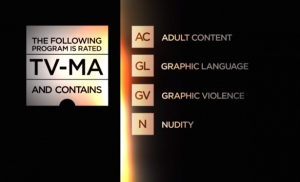 EM: The way we rate other media is subjective, though. A movie with a gay sex scene is more likely to receive an “R” rating than those with straight-sex scene, for example. I think ratings for books could be subject to the same potential for abuse. Also, I think there are so many other outlets for people to get this information. For example, professors put out their syllabi well before the class starts or an add/drop period ends. Students can and should take a proactive approach.

This is why I was asking the questions about An Untamed State. I find stories about rape to be upsetting, so I googled the book, figured it might be too much for me and decided to stick with her essays and Twitter account. I think students can do the same. If they find something to be too upsetting, then they can discuss alternatives with their professor or their counselor.

DL: All of that is very much true. In the end, I think the argument for trigger warnings are just to make that information easier to find or identify before the student gets too far involved in the class.

As for my own experience, I also don’t like reading about rape and I don’t know if I would have selected to read the book had I known how intense the scenes were. I had looked up reviews, but most of them focused on the prose. Would that mean I was avoiding or refusing to deal with the topics the book brought up? I’d like to think not, but someone could argue either way.

EM: Absolutely, and I think that’s the harder question. A lot of the articles I read to prepare for this talk were either “Look at these entitled babies!” or “These stupid professors won’t acknowledge me!” People on both sides seemed to be doing a lot of whining.

I’ll go ahead and say that I didn’t read An Untamed State specifically because I wanted to avoid the topics it brought up. That’s not to say that I always avoided rape narratives, I just didn’t feel like I could deal with that one.

DL: Should he have gotten featured as an op-ed writer in The Washington Post? Nope.

Black Chick Lit examines reading, books and bookish culture from the perspective of two women of color. Find us on twitter at @blackchicklit.