Introducing the BLC Book Club, where Elizabeth (EM) and I (DL) will discuss books, reading and life. As this is our first Book Club post, we thought we’d start with something pretty basic: what we read and why. 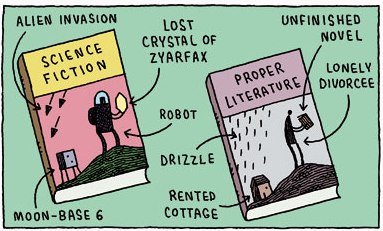 DL: How fitting is it that you’re now currently reading The Turner House and I’m reading Welcome to Night Vale? I feel as if my tolerance for trashy literature is higher than yours, but I don’t think we’ve ever discussed it. So now I want to hear it: What’s your opinion regarding genre fiction versus literature fiction?

EM: Hmmm … that’s an interesting question (especially, since I ordered WTNV immediately after seeing your tweet). I want to say that I don’t have anything against genre fiction. In fact, the first big paper I wrote in college was about the value of genre fiction and an analysis of a Scottish romance novel. But,you’re right, I don’t read it that often and I’m not sure why.

And really, it’s just fiction. I read a lot of true crime (hello, Texas Monthly), science writing, personal essay and travel writing. But for some reason, it doesn’t carry over to fiction.

DL: I read the trashiest of stuff and get real protective of it: romance novels, science-fiction and (you don’t know my embarrassment at saying this, you really don’t) even fanfiction. I can and do real actual “literature,” but that’s never really been something I love. Even when I was in my creative writing classes in school, I knew I wanted to write genre fiction.

EM: Ha, no. If I remember correctly, it had a similar plot to Outlander, but it was way worse. Now I’m curious, what is it about genre fiction that you feel you miss when you read literary fiction?

DL: I’ve never really thought much about it. I don’t think I’m missing anything. I think I just view literary fiction as more tasking to read. When I read literary fiction, I focus more on the prose, the style, the characters’ motivation, etc. I don’t do all that with genre fic, so I can breeze through them faster.

That and genre fic is specifically written to play off all our basic interests: sex, violence, aliens. I also like that I know what to expect, which again means I can read and enjoy genre fic in a much larger quantity than literary fiction.

EM: Very interesting. I think that’s what I like most about reading — the technical aspects of it. I also hate getting through a book too quickly. In one of those people who will put off reading the last 10 pages of a good novel for months (in the case of Catch-22, forever). Though I do like genre fiction for the same reasons. I read all of the Southern Vampire mysteries in like two weeks and had a good time doing that.

DL: There are literary books I like. It took me more than a year to finish The Souls of Black Folks, and that’s easily the best book I have ever read. I will say, though, it’s harder to find black genre fiction than literary fiction … which surprises me for some reason.

EM: I wonder why. I know that Harlequin has those “urban” imprints though I haven’t read any of them. Are they typically written by black people?

DL: I know about the Kimani imprint. I don’t think it’s considered urban (at least not in the way the fiction defines it.) But, yes, they’re written by black authors. That’s only one imprint, though, of one very narrow genre: contemporary romantic fiction.

EM: I wonder if self-published would have more options. It seems like there’s a gap. There’s literary speculative/fantasy (like Boy, Snow, Bird, for example) and I imagine there’s self-published and fanfic stuff. But it doesn’t seem like there’s anything in the middle of the road. It could be my own ignorance of the field, but where’s the black Charlanie Harris?

And the self-published/indie-published markets do seem to have a lot more options. We’ve had our Twitter account up for like a week now and I see romance and mystery titles by black writers that I hadn’t been exposed to before. I don’t think there’s ever been a shortage of writers; the problem is none of it’s getting promoted by the bigger, more mainstream outlets.

EM: Absolutely. It could be more of that black exceptionalism. Like a black author needs to be twice as good as a Jonathan Franzen just to get a publishing deal. I wonder what we could do to shine a light on more indie authors.

DL: We really like to shit on Franzen. He makes it so easy.

EM: Yes, he does make it easy. Easy and fun.

DL: To answer your question, I think to highlight more indie authors, I need to read more indie authors. I’ve been looking for more sci-fi and romance to read and it seems like there are tons of recs on Twitter and Amazon. Genre fic is the “pop music” of books. There’s a push to see more diversity in music, TV and movies, so it makes sense that push would exist in books, too. And I don’t think increasing diversity there would affect the diversity of literary fiction. I think we prove there are two different types of readers.

EM: Agree, I think there needs to be a greater diversity of authors across the board. And I would be interested in reading more genre fiction!